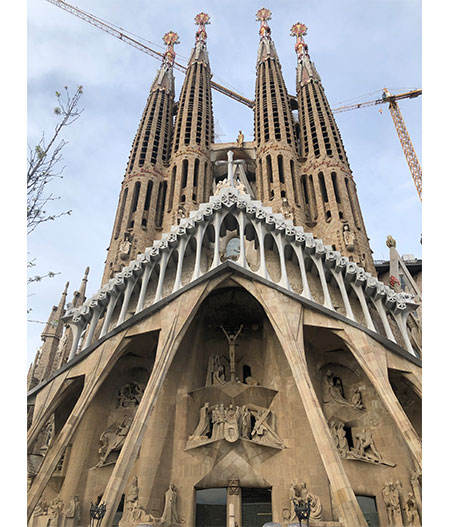 The world has many wonders and this should officially be one of them. The attention to detail and message delivery at every corner is mind-blowing.

Designed by: Catalan Architect Antoni Gaudi (1852-1926)
On March 19, 1882, construction first began by first architect Francisco de Paula del Villar until a year later he resigned and Antoni Gaudi took over as chief architect.
Gaudi’s Architectural Style: Combination of Gothic and curvilinear Art Nouveau
Upon his death in 1926, he was buried under a crypt and only a quarter of the project was completed.
Solely relying on private donations, construction progress slowly, but was interrupted by the Spanish Civil War. In 1936, revolutionaries set fire to the crypt partially destroying Gaudi’s plans, drawings, and plaster molds. It took 16 years to piece together.
Construction resumed in the 1950s and with new technology, construction has since enabled faster progress past the midpoint in 2010. It’s anticipated the building will be complete by 2026, the centennial death of Gaudi.
Every Sunday and holiday Mass takes place in the basilica.
With a nominal fee, guided tours are available inside the building and towers.
TOP Tourist Attractions in Barcelona