How To Save $1 Million Dollars With Compound Interest-Medium Digest 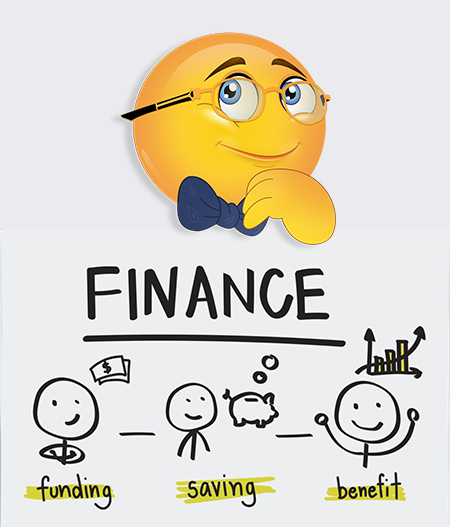 There’s something about having $1,000,000 that garners people’s attention — like a magnet, that big round number can’t help but attract your eyes. It’s a number that people associate with having wealth. Something about turning 6 digits in an account into 7 captivates the American population; it’s a faraway goal that is just close enough that many people inadvertently strive to reach that number.

Which makes sense, being a millionaire is quite a common occurrence. About 11 million Americans are considered millionaires, sounds crazy high right? Compared to the population of the US (325 million) that’s about 3.4% of the American population. In some areas it’s more extreme, 13% of New York City’s population are millionaires, the highest concentration of “High Net Worth” individuals in the world.

That’s 11 million people that have reached the $1,000.000 goal. So how far fetch could something be if 11 million people have achieved it? Which starts to indicate that even you can save $1,000,000. That you don’t necessarily have to be a person with a large salary where money rains every time they make a decision. The numbers to reach $1,000,000 aren’t as out of reach as people imagine. This is especially relevant the younger you are, someone in their 20s should be doing their best to make saving $1,000,000 possible for them.

The most powerful tool you can have when saving is compound interest. It’s the classic protagonist that gets more powerful with time and small power-ups, where even a 1% change in percentages over a long period can have a profound effect. Whenever you talk to an investor, the % of returns they make on their investments is almost always the most important aspect they talk about.

The Gold Standard of Investing

The gauge that most people use for a standard return on an investment is the S&P 500. The S&P 500 is made up of 505 (ironic that it isn’t 500) of some of the largest companies in the world that are bundled together for people to use as a market index, which is a measure on a section of the stock market. For most investors, one of the best things you can do is to invest in an S&P 500 index fund, which is a fund that matches the S&P 500. Over the last 90 years, the S&P 500 has returned, on average, 9.8% of compounded interest every year.

Give me some of that compound interest

Imagine this, you put $100 in an S&P 500 index fund, and you leave it there for 10 years. With simple interest, you would only receive interest on your principal deposit, which is the initial amount of money you put in, so you get $9.80 every year on your deposit. So after 10 years, you would have a whopping $198, not bad right?

But, compound interest is even more powerful! The beauty is that it allows you to earn interest on the money you’ve earned too, not just your deposit.

Still, $255 is a far cry to $1 million so what does it actually take? To simplify this calculation, we’re going to assume a specific interest rate of 9.8%. In reality, this rate may be a little bit lower with management fees and some diversification in bonds, but I feel that showing how mighty S& P 500 returns are is essential teaching. How I’ll solve for a million dollars will be based on how much money you need to save every day with time frames of 5, 10, 20, 30, 40, and 50 years. I like using the daily time frame as it allows people to gauge their everyday spending. 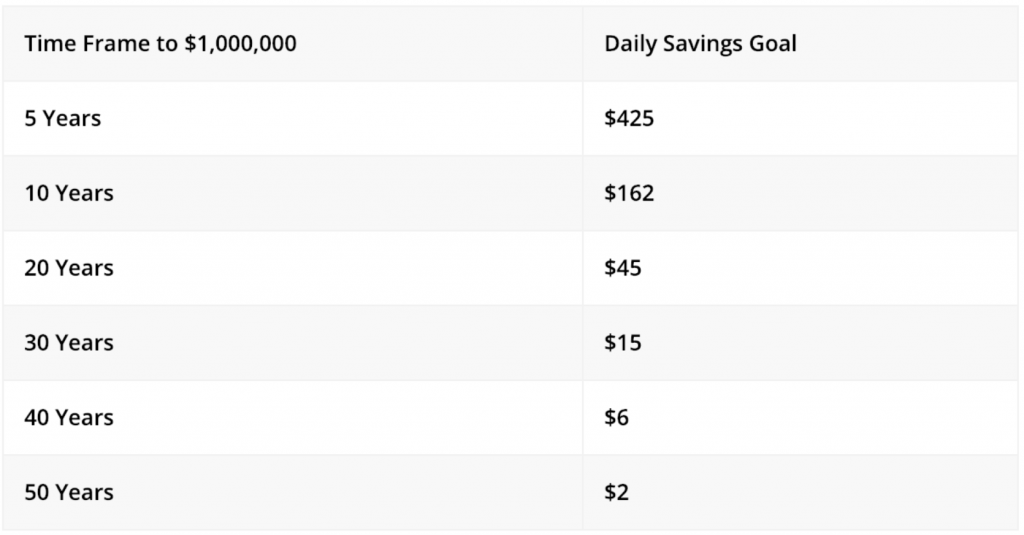 If you want $1 million in the near future, it will take a bit of money. Pointing to the fact, that it is important to start saving for retirement or any savings goal as soon as possible.

The more time you have to save for any goal, the more you can utilize the power of compound interest and decrease the burden on your day-to-day personal finances.

$424 a day is a lot if you want to save a million in 5 years, but just doubling your timespan to 10 years reduces the amount you need to save to almost 1/3rd of the 5-year time frame. Give it even more time, and the numbers start looking manageable. For me, $15 a day is giving up my lunch here in NYC and packing my own, and $6 is the coffee and scone I always buy at the corner of my office (Yes, i know those prices are obnoxious, but restaurants have to pay for $20,000 NYC rent somehow).

I wasn’t lying when I said compound interest gets more powerful with time. It’s so powerful that if your 20 right now and start saving JUST $2 a day, by the time you’re 70 it’ll reach $1 million. There are other aspects to think about, inflation is the most important, but if your goal is to just achieve that 7 digit number we can think of it this way. Of course, the S&P 500 may not return at a 9.8% rate over the next 50 years, but even adjusting for an 8% return, $4 a day would get you to $1 million. Who knows, maybe it’ll return even more than 9.8% a year. Unfortunately, I can’t predict the future.

Ask yourself, what does this money mean to you right now? To me $2 is as simple as just automatically saving $14 a week from each paycheck, I know some people have it rough, but I honestly do think that finding $2 a day is a doable endeavor for those with the gift of time. The best part is with these denominations of money your interest could be tax-free by putting money in a ROTH IRA, a specific investment account that doesn’t tax any of your gains from compound interest and is made explicitly for retirement.

Gone are the days where simply saving money in a bank account is good enough for most people. With the rising wealth gaps, it’s not just salaries that add to the difference but also that wealthier people are investing and making money work for them. I know it’s tough when you’re struggling to just make ends meet, but make it a goal and a mindset. $2 a day, $3 a day, $5 a day, whatever you can do. It’ll get powerful. You start analyzing your expenditures to make sure that you can save that amount of money every day, no matter how small it is. It takes root and slowly but surely it takes hold. Learn good financial habits, engrain them and strive for your goals.

Trees don’t grow in a day, and neither does your money.

Originally published at www.savvysavior.com on February 17, 2019.